IBM Power9 Servers may be the best Linux server to run your applications.

Although there is no one single answer to this question, the two statements address what most people want to know when comparing Linux server workloads, such as: application server, database server, cloud server, SAP server, analytics server, business intelligence server, web server, media server, HCI or like x86 workloads.

The questions and answers in this article are based on real-life business scenarios, independent x86 Linux server comparison case studies, industry experts, competitor specifications, vendor testing and other fact based benchmark laboratory testing results. The questions revolve around the important business decisions companies must make about how to lower licensing costs, operating costs and/or how to improve application response times for business units. Fact: 80 percent of the Fortune 100 companies use IBM Power Systems.

Q: What applications can I run on a IBM Power Linux Server?

A: Any x86 Linux server application running on Ubuntu Server, SUSE Linux Enterprise Server and RedHat Enterprise Linux is supported. In addition, the community versions of Linux server like Debian, openSUSE, CentOS, Fedora and others can also run on IBM Power Linux servers.

Q: Does an IBM Power9 Linux server cost more than an x86 server?

A: Yes, maybe and no. When comparing the upfront hardware costs of purchasing a IBM Power Linux server solution to a comparable x86 server solution, x86 hardware may be at times less expensive and sometimes not. However, after accounting for lower licensing costs, reliability, implementation time, scalability, performance, ongoing management and security, IBM Power9 Linux servers have a much lower cost of ownership compared to alternative x86 servers.

Q: Why does a IBM Power Linux server have a lower TCO compared to an x86 server?

A: IBM Power systems provide better performance per core, which means fewer cores needed to run applications, so software licensing costs will be lower. Fewer server environments require less system management, database administration and other labor costs, which lowers operating costs. Other cost saving benefits include smaller physical foot print and lower power consumption. Although an x86 server may have a lower upfront acquisition costs, industry testing and case study results prove this does not equate to a lower cost solution. On average, businesses can lower costs by 57% when migrating x86 workloads to a IBM Power9 Linux server.

Q: Which Linux server is the most reliable?

Q: How many IBM Power9 Linux servers would I need to replace my x86 server farm?

A: Most environments would only need 1 IBM Power9 Linux server to replace an x86 cluster or server farm, but a workload analysis will determine the proper sizing of a Power9 replacement solution. A IBM Power9 server can have up to 192 cores. Below are some real world Power9 migration examples, illustrating the cost saving benefits by only calculating the initial server and software licensing costs over 3 years.

The result is a $1,081 cost savings per container running on the IBM Power9 server, allowing 1.7x more containers (3.2x more containers per core) and 2.6 better price performance than a comparable x86 server. This company can now scale out MongoDB workload using half the number of x86 servers, providing significant savings for core based software licenses.

As you can see from the above results, IBM Power Servers thread count enable more containers per server. In CPU demanding workloads, x86 servers hits a maximum container count faster (72 containers) than Power9 (more than double x86) and has 15% less throughput than Power9. If these environments need additional cores, the x86 costs will continue to increase for the server to reach equivalent throughput of the Power9.

Using the EDB pgbench mark, 853,709 transactions per second were achieved on a EnterpriseDB Postgres Advance Server 10 workload running on:

Compared to 611,118 transactions per second on:

Read about more business case reasons to switch to Power9 for Linux server workloads at Power9 Linux Server case studies. Contact us for specific benchmark or workload type you would like to see performance and sizing information on.

A: IBM Power Systems are built with security at every level, from processor to the OS, and deliver end-to-end security out of the box. All IBM Power9 Linux servers are delivered with pre-loaded firmware and operating system security patches that mitigate known vulnerabilities and threats such as Meltdown and Spectre, which include all supported OS types: Linux, AIX and IBM i OS400. The IBM Power server holistic security measures include the hardware, hypervisor, firmware, operating system, applications, network resources and security software.

A: Yes, there is no contest. Please see the chart of the IBM Power Linux Server line, and let us know if you would like to compare server pricing for an x86 replacement: Power9 Linux Server Models Specifications

A: In most cases, no. After recompiling your x86 code, you will be ready to go without making any additional changes. Some customers have claimed over 8x performance improvement immediately upon migration. Below are some real life examples and case studies.

Earth Signal Processing LTD applications are written in very simple C and C++, composed of approximately two million lines of code (800 programs and about 150 libraries), and it took about an hour to recompile on IBM Power.

The software immediately worked without any other changes, and saw a 100 percent performance improvement right out of the box, took 1/10 the x86 rack space, and saw over 40 percent decrease in power consumption.

LiveMon’s application is written in FPC (Free Pascal Compiler) and assembly language, composed of approximately 200,000 lines of code, and recompiled in under two hours and did not require modifications to run on IBM Power. Their application immediately saw a 2x performance improvement over the x86 server environment, and got an additional 8x performance improvement after performing some optimization.

Vuble runs web services on Ubuntu Linux and uses a basic LAMP (Linux, Apache, MySQL, PHP) stack that has precompiled packages available for PPC64 Linux distributions, so they did not have to recompile any code. All they had to do was move files from the x86 server to the IBM Power server. Vuble reduced their server foot print by 5x, achieved a 15% reduction in response times and performs 94% less server administration.

A retail chain with a hybrid database environment MongoDB, Redis and DB2 and a batch application that consumed all available cycles on the system needed to dramatically improve application response times. After the databases and application was migrated to the IBM Power server, it executed 12X faster than the x86 Linux server, utilizing only 10% of the processor, while taking the x86 batch job down from 24 hours to less than one hour on the IBM Power server. The database migration to the IBM Power Server involved using the MongoDB dump/restore program, which took one business day to complete.

Q: Is there a guide to help migrate x86 workloads to a IBM Power Linux server?

A: Yes. Below are a few links to help you migrate your x86 applications to IBM Power-based platforms:

Send Us Your Server Workload For Analysis.

A Small company may save thousands per year.
While a larger company can save millions of dollars annually.

If you have not seen enough evidence to build your business case to switch to a IBM Power Linux server, please request from us supporting documentation that reflects your specific workloads.

Midland also provides a detailed workload analysis, illustrating how your applications will run on a comparable Power system, whether it be for Linux, AIX (Unix) or on an IBM i system. The bigger your environment, the more money your company can save by switching to IBM Power servers. Small companies may save 10s of thousands per year, while larger companies can save millions per year.

We offer very flexible and affordable monthly and quarterly payment options, as well as financing options as low as 0% for 12 months and long term leasing options providing both $1 buyout and fair market value buyout.
ibm-power-linux-server-financing

IBM i Encryption for Data Protection and Privacy Compliance 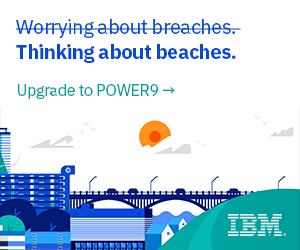